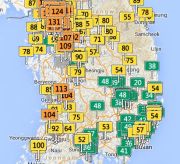 In August of 2009, Pusanweb.com moved operations over to Koreabridge.net.
Updated information About Koreabridge is here.

Below is earlier information about Pusanweb

When Jeff Lebow first created Pusanweb in March of 1997, it was basically one person's attempt to provide useful English information and a few photos and video about life in Busan for English speaking visitors and residents.

The look of Pusanweb changed over the years, but the basic idea of providing English information about life in Busan and Korea continued along with the photos and videos of events around town. The layout changed, the graphics got a bit more sophisticated, the multimedia quality improved.

In April of 2002, Pusanweb was relaunched with a new design, new site structure, and the beginnings of a new management system. This was an attempt to make Pusanweb more community-based and interactive. There was quite a bit of interest from the community at that time to help Pusanweb grow. Over the next couple of years Photo Contests and Writing Contests were held as were the Best of Busan surveys.

In March 2006, our server was maliciously attacked resulting in a complete system crash and the loss of our more recent material. The Pusanweb Management Team had been contemplating re-designing Pusanweb in the year previous to the attack, and this was the motivation we needed to get things going. Life, however, got in the way of plans, and the re-design and re-lauch ended up being delayed yet again, until now.

We're finally ready to go. November 2006 is the month of Pusanweb 2.0. With this Re-Launch we hope to get the community involved more than ever before. Over the years, software has become both more sophisticated and user-friendly. It's easier than it's ever been to create and upload content and to add multi-media and we're looking for your contributions.

The Management Team is really excited about Pweb 2.0 and hope that the Busan community pitches in to keep Pusanweb a useful, interesting, and interactive site.